Disney recently revealed why they’re dropping Li Shang, the love interest of 1998’s Mulan, out of their live-action adaptation of the film. And it’s, like, really dumb. Producer Jason Reed has said it’s in response to the #MeToo movement, as Mulan’s superior becoming romantically invested in her would be seen as problematic in light of said movement which revealed the amount of sexual crimes committed by powerful figures in Hollywood. Instead, the character will be split into two others: Mulan’s general who will take on a more father figure-like role played by Donnie Yen, and ally soldier and love interest Chen Honghui, played by Yoson An.

Now, to be clear, the change itself is not really the issue. I honestly welcome, with open arms when these fucking remakes do something at least slightly different. Reed’s comments rub me the wrong way here though, because it’s a reaction to an imaginary conflict. Nobody thinks a superior officer falling in love and pursuing one of their soldiers in a non-conflict setting is creepy, as long as they don’t use their position to manipulate said soldier into a non-consensual scenario. Which, I mean, Li Shang never does. He goes to Mulan’s house long after she was thrown out of the army after her deception was revealed, and she invites him over for dinner. There is absolutely no way to read this that makes Li Shang look predatory or inappropriate in this scenario.

Of course, this could be covering up the real reason Disney made this decision, which I cannot really comment on officially but can idly speculate implying that it is true. Li Shang has kind of become a figure of bisexuality within the Disney canon because of how his relationship with Mulan starts. How can this be the case when it’s explicitly shown in the text that he pursues Mulan after finding out she’s not a man? Well, I’m glad you asked me, convenient strawman.

I should probably elaborate on this concept a little-I talked about it with a friend of mine and he thought it was about programming gay men into a server. Queer coding is more a literary/film term. It’s a way of indicating or fitting certain characteristics to your narrative that is not in the heteronormative persuasion without outright stating this as the case. An example of this could be Oscar Wilde’s The Picture of Dorian Grey. Or Oscar Wilde’s anything he ever wrote, but this one was brought up in his court case, so yeah.

And this extended to Disney movies, too! Unfortunately not always in positive of ways. A lot of the villains in the Renaissance era-Ursula (and because people will mention this if I don’t point it out, that’s because her design is based on a drag queen), Scar, Jafar, that….guy in Pocahontas-have a lot of queer coded actions and characteristics because it others them. It makes them feel…….”wrong” to a generally heteronormative audience. Now, this isn’t intentional (at least as far as I know), but it does speak for how these depictions can be used to reflect in more than just queer filmmakers trying to get around the cultural and even legal restrictions of their era.

But this can be seen as positive, too. Look at Timon and Pumbaa in The Lion King. They act like an old married couple (something sadly missing in the remake) and basically adopt Simba. The main character has two adoptive gay dads, and it’s wholesome and nobody cares! Whether  intentional or not, it’s a way for an audience very underserved by mainstream cinema to see themselves and their lives reflected on the big screen, especially when they’re younger and figuring shit out.

This is something I want to focus on when speaking about Mulan. For you see: 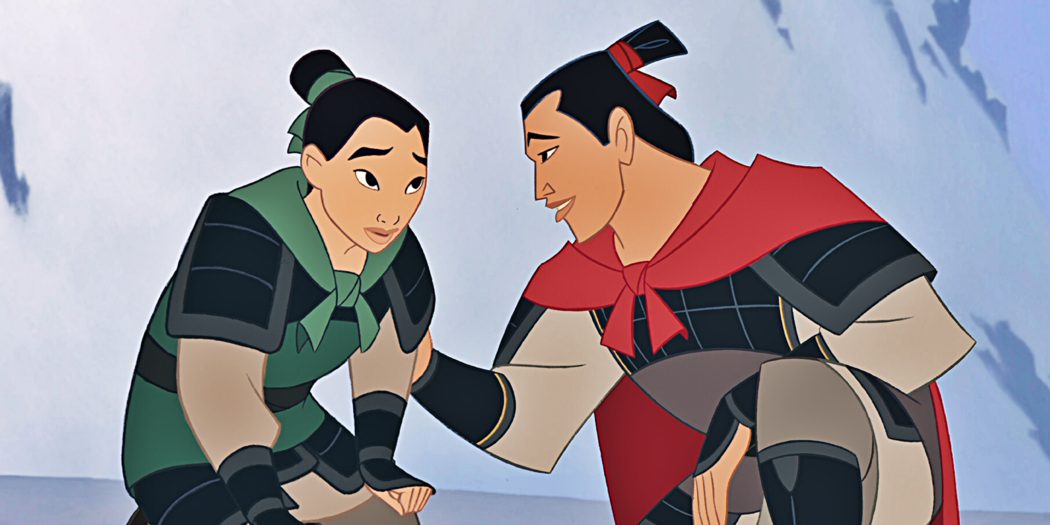 Upon watching Mulan for the first time in years, I was struck by a few things:

And I was ready to dismiss this as people reading too much into this or just queer coding gone rampant, but goddamn is it blatant just how much he is interested in Mulan when he thinks she’s a guy! They have a meet-cute when they first see each other, with Mulan (as Ping) awkwardly flustered introducing herself, and Li Shang getting irate and annoyed by her fumbling. It’s adorable, and that smile he gives in the Be a Man montage when “Ping” kicks him-that’s not how you smile at a subordinate you’re proud of, you guys!

And there’s that sweet scene when Ping says you’re a great captain, and he looks back with a sensitive, grateful look. When Mulan is eventually found out, the only sense of betrayal is that she lied to all of them, not over her gender being outed. Considering the movie does have characters express clear annoyance or even disgust at this, Shang is only angered by the deception. Because he clearly had a stronger bond than just friendship with Ping! 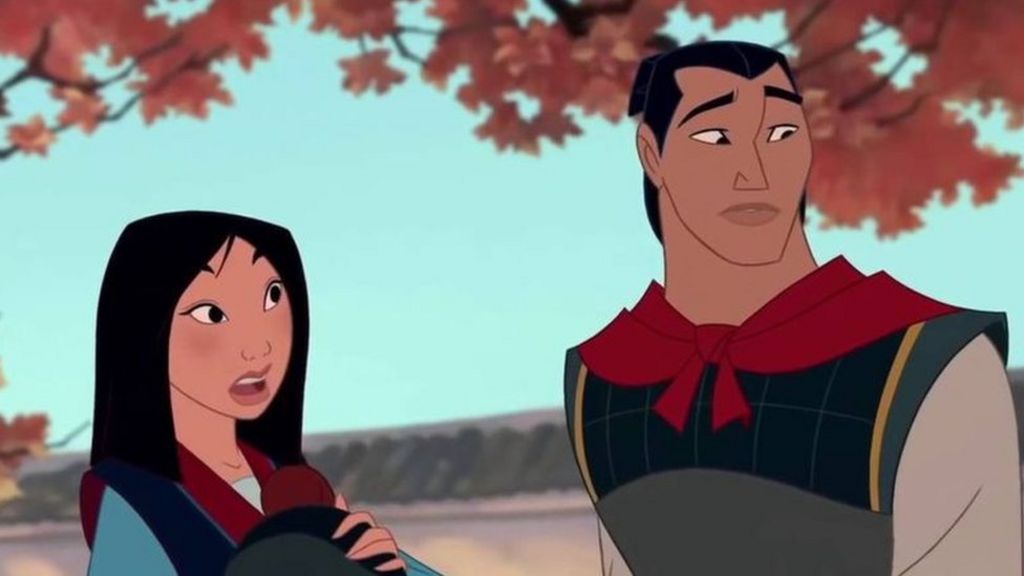 Again, even if this wasn’t the intent of the filmmakers (they seem to be hinting that he just kind of senses Ping is not a man, but that’s not really how it comes across), it’s great because bisexuality is not something that got a lot of rep, especially in the 90s. Having Shang show so much interest and have a lot of their relationship build while he thinks Mulan’s a man is a great way for younger bi people coming to terms with their sexuality. They can see something in this pairing in a medium that isn’t hypersexualised or prone to make the characters pay for their non-adherence to heteronormativity.

Speaking of, however, I think this movie is a lot more interesting thematically if you look at how it views gender. 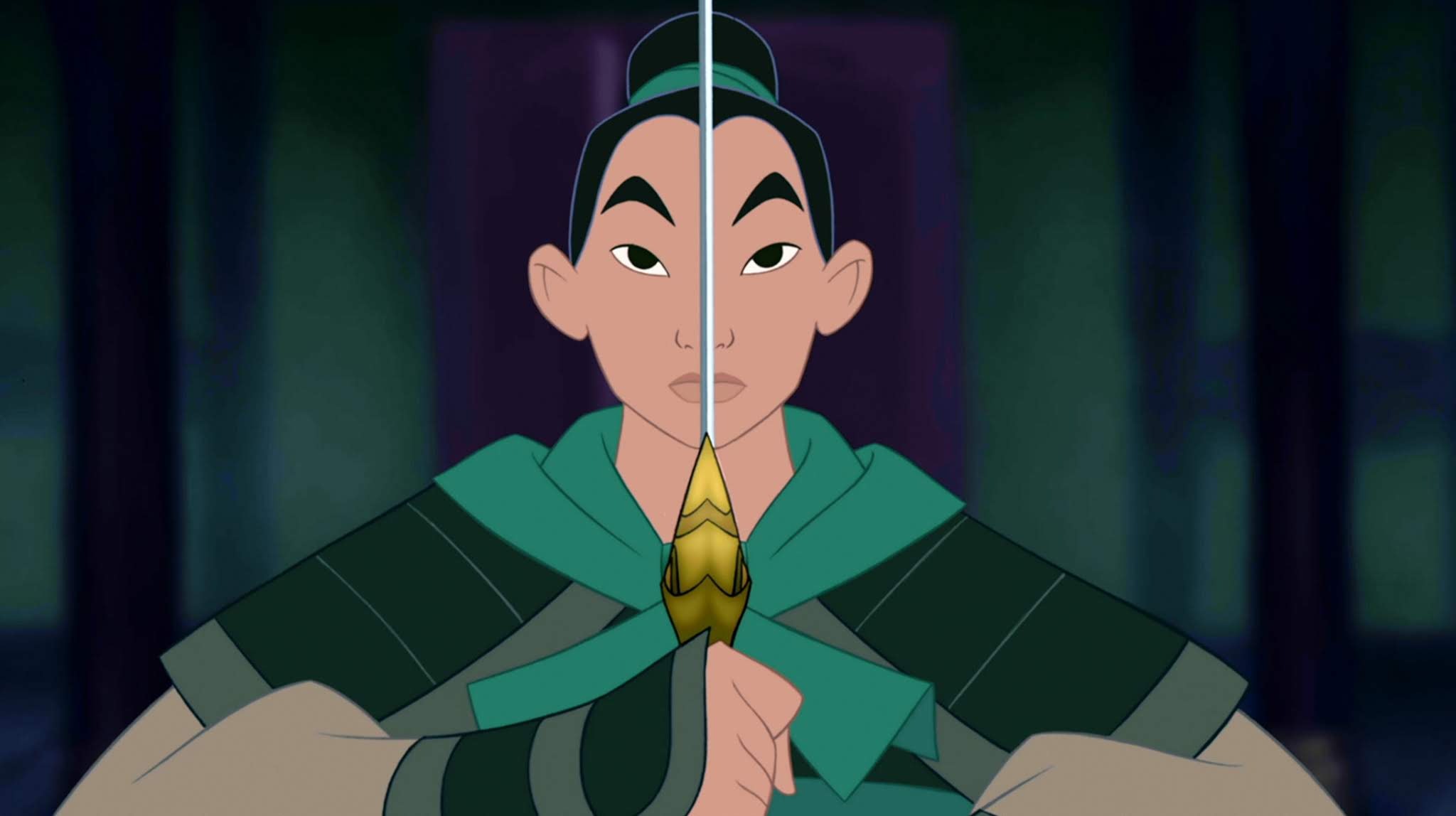 Mulan’s journey is about saving her father from dying in the battle against the Huns. Except it kind of isn’t? She gets every opportunity to leave without her father being conscripted. Hell, in the most famous song in the movie, Shang says to her straight up “Pack up, go home, you’re through”. Mulan has an excuse to leave while honouring her father’s draft. And she doesn’t. Why is that? Because she finds acceptance and purpose while being Ping.

This movie can be seen through a surprisingly potent trans or nonbinary lens. It’s all about Mulan trying to figure herself out when not fitting with the gender norms of her society. We see this right from the beginning with the matchmaking scene. Honor to Us All is all about finding a place (and a husband) through femininity. Mulan’s two lines in the song indicate 1. She’s more prioritised with her father’s health, and 2. She appears to be more interested in doing this for her family’s sake than hers. And, of course, she comedically fails and is told she will never bring honour to her family. She’ll never be a “perfect woman”.

This leads into Reflection, Mulan’s “I Want” song. Her desire expressed here is not to see her family safe, it’s to be able to see who she truly is because she will “never pass for a perfect bride, or a perfect daughter”. Showing whoever this is will break her family’s heart. It’s such an important song because it displays what’s really keeping Mulan down: society’s gender norms and her inability to embrace femininity by these standards.

So she pretends to be a man and everything works for her, right? Actually wrong! She really sucks at it! Her attempts at performing masculinity to fit in just fall flat on its ass, and leads to the ire and anger of Shang and the rest of the soldiers. It’s only when she embraces what makes her so unique-her intuition, her compassion, her ability to think outside the box, and even manipulate gender norms to her advantage-is when she finds a sense of purpose and belonging. When she’s rejected after being found out to be a woman, she moulds what she learns about these experiences and comes out a much more well-rounded, contented and happy person. Her struggles with gender helps her grow up and save China!

The movie in general treats the gender dynamics in an interesting way, if not completely enlightened. I mean it’s a movie from 1998, some casual transphobic or misogynist jokes come up here and there. I already went over Shang’s reaction to Ping, but there’s that moment in A Girl Worth Fighting For when the girls show a blushing attraction to Mulan-as-Ping. While Mulan’s soldier friends dressing in drag is not the most transgressive thing, it’s actually cool how comfortable they are. Compare that to the pay panic joke in Beauty and the Beast not 7 years prior where men ran in terror over being dressed as women.

Just to outline I’m a cis dude, so I wouldn’t have a lot of confidence in these aspects and how well Mulan channels them. I read an article by nonbinary Asian American acotr, writer and comedian Jes Tom for reference on these themes, and I’d recommend you read it for a more personalised and nuanced take  (they’re not as kind to the male soldiers in drag moment, for example).  I can’t tell you how trans or nonbinary people felt about this film from a young age, but considering the lack of media that represented them especially in the 90s, even now, I can imagine a lot of queer people hold this movie in high regards, 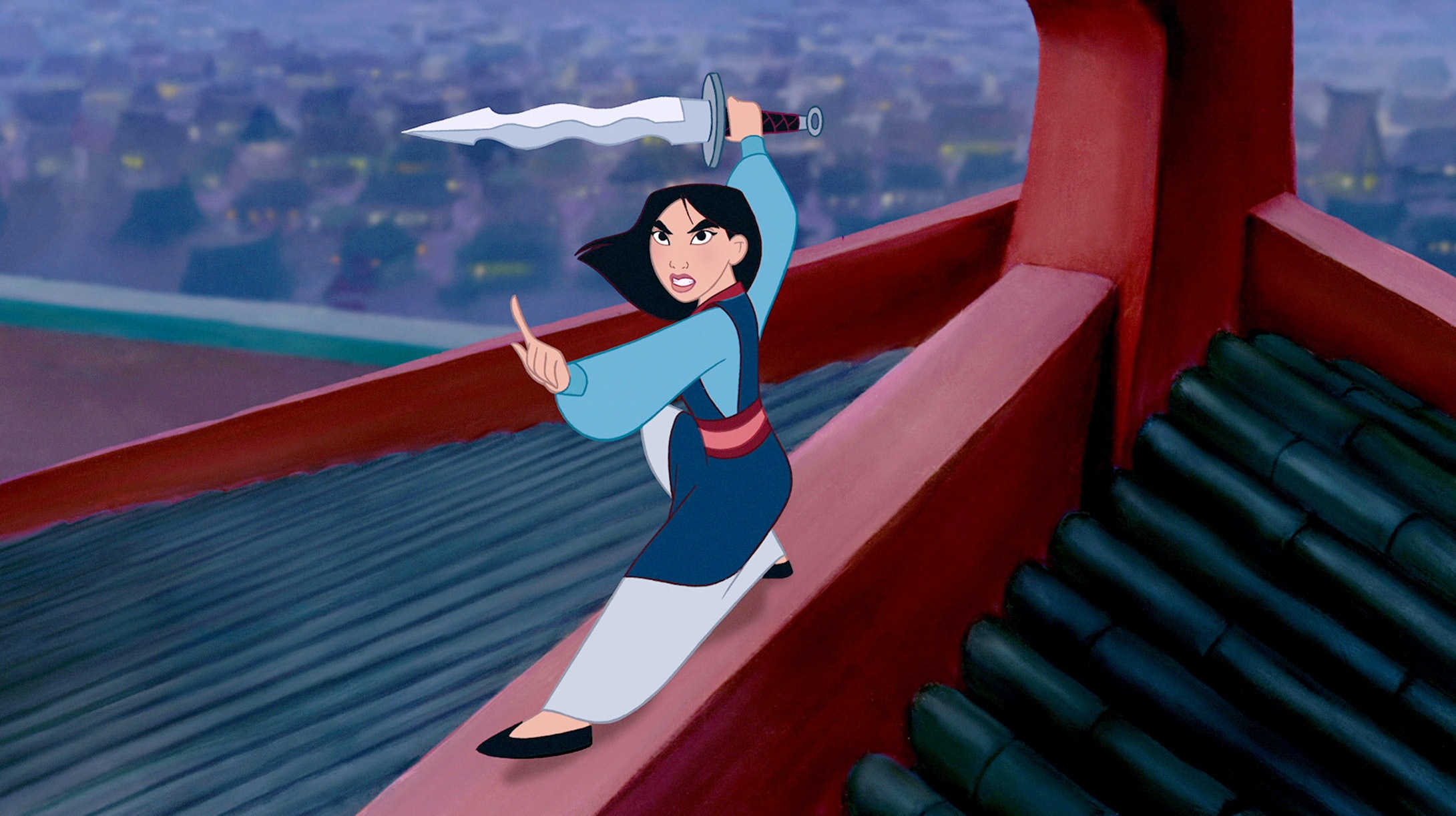 So why did I write this? Well part of it was to capitalise off the live-action movie as it was coming out recently, but uh….circumstances have postponed that. Mostly it was my annoyance of that dumb reason to split Shang into two characters, combined with Disney’s continuous trend of being celebrated for not doing a lot for LGBT representation in their media. This culminating in the praise for Onward, having it spread all over the media that a female cop, in the only scene where she speaks, mentions having a girlfriend.

What’s really annoying is that they actually show a lot of support to the LGBT+ community behind the scenes, like at their parks. Here’s a video that goes into that. But their media, the content most people will ever know them for? We get one throwaway line about a character having a same sex partner. They’re at the stage Paranoman reached 8 years ago, and that was used for a joke!

If you look hard enough, there’s been a consistent flow of Disney and themes about gender and sexuality in their prior work under the surface, and this is being completely washed out for weak “Girl power!” aphorisms and the barest minimum to make gay characters visible. Only slightly, and if we can cut them out to sell the products to homophobic markets! It’s weird to me that they feel better represented in media that was too afraid to ever touch any of this overtly. What’s most disappointing, however, is that they had grounds to introduce more explicit queer content in their remakes, look into expand on these implications or coding, and they won’t. Every. Single. Time. And we’re meant to be happy because Josh Gad danced with a man for a nanosecond.

Maybe it’s asking for too much. Maybe I’m being too dismissive or negative on Disney’s efforts. But I fail to see anyone under the LGBTQ+ banner feeling properly reflected by the biggest entertainment conglomerate on the planet. Let’s hope these things will change.