Water is very fluid. Terrible pun, to be sure, but it’s true in terms of its metaphorical content. It can be used for a lot of different things. Journeys, flow of time, life, Pocahontas nearly breaking her neck going down it.

One of the most provocative uses of water in recent memory comes from Moonlight. I’m sure most of you know this movie, but for the purposes of this analysis: it follows a young man named Chiron at three crucial points of his young life (as a child, teenager, and adult) as he struggles with his sexuality and the confines of masculine conformity. Where does water come into this? Long story short, it’s his baptism.

The movie plays out like a series of vignettes in Chrion’s life, and Juan dominates the first one. He’s also one of the three most important people in his life, alongside Kevin and his mother. Juan is one of the only adult figures who listens and connects to him, but this is offset by his connections to the drug world that’s destroying Chiron’s mother. Even with Juan’s warm and very open acceptance of him, he cannot lead him as an example of a positive role model. That’s why there’s a lack of clarity in his guidance when he’s Little-he does not have the positive influence to move him out of the tide.

The most important moments of Chiron’s story are depicted on the beach. One of these is, of course, the scene where Juan teaches him how to swim as a child. He tries to guide the younger man towards a world that will persecute him for himself in more ways than one. Chiron’s masculinity is tainted by the struggles put upon him by identities he did not choose. The baptism of his journey is marked by the violent nature of his surroundings.

It’s during this scene where we get our title drop. Juan tells Chiron about an old Cuban woman he ran into as a child. She said the moonlight makes black boys blue after she sees him running around at night. Him comparing himself to Chiron makes that exact parallel more apparent-Juan is blue because he has that clarity in life. This is something that evades Chiron, whose inner child is unable to soak up that moonlight that could connect him to other black kids. His repressed sexuality makes him an outsider within his own marginalised group. It’s telling that he calls himself Black later on (that and it’s connection to Kevin).

This feeds back into the water, which represents purity and clarity.  Impure or unclean water comes up a lot. When Chiron comes home, his mother’s boyfriend is holding a beer bottle. This represents a sense of neglect and uneasiness, repeated again when he comes home to only an empty beer bottle to greet him. We see him after this pour washing up liquid into a bath, and mix hot and cold water. This not only exemplifies how lost and alone he is, but how everything is unclear to him due to his negligent home life. His homophobic, unstable mother will not help him reach that stillness; no peace for Little.

This is even shown in what Chiron drinks. He has juice when at Juan’s house while the big man drinks water. He is clearer and more concise than the young boy when they first meet. Later on, they’re both drinking orange juice; they are equals here, but things get irreparably complicated once Juan reveals he deals drugs to Chiron’s mother. He does start drinking water later on in life, but as a teenager Teresa jokingly refers to it as gin when she serves it to him. He has not reached his adulthood. He starts drinking water as an adult, but we see him pour a glass in an intimidation tactic when he pretends his subordinate is low on drug money. He’s still not entirely clear, he just thinks it.

Of course, there is one person clear to him; Kevin. While Juan tries to be straight with him but cannot reconcile his drug dealing, and his mother is only ever straight once she finally hits rock bottom, Kevin is honest and forthright. He’s the one who tells him he needs to stand up to people in order to stop them picking on him. While he internalises this in a negative way, it’s solid enough advice from a child. In a world that will never accept Chiron, he needs to stand up to it. He’s open and frank about his romantic accomplishments to him too, and we see his greatest honesty in the scene at the beach.

The ocean is strictly connected to Chiron and his burgeoning sexuality-we hear it in the dream he has where he sees Kevin having sex with a woman next to a pool (more unclear, or unnatural, water). At the beach, we have an interesting mix of all elements: the air is cooling, the water calming, the fire passionate and sand is grounding. Kevin describes himself as fire, and Chiron is water. One helps calm the bursting flame, the other helps him become alive and spirited. Not compatible but have an adverse effect on one another-it’s a great metaphor for their bond. We see that in full display here-at the ocean, where everything is clear. The use of the semen in the sand is another visual staple for their relationship; it can be honest and clear for moments, but needs to be covered up. 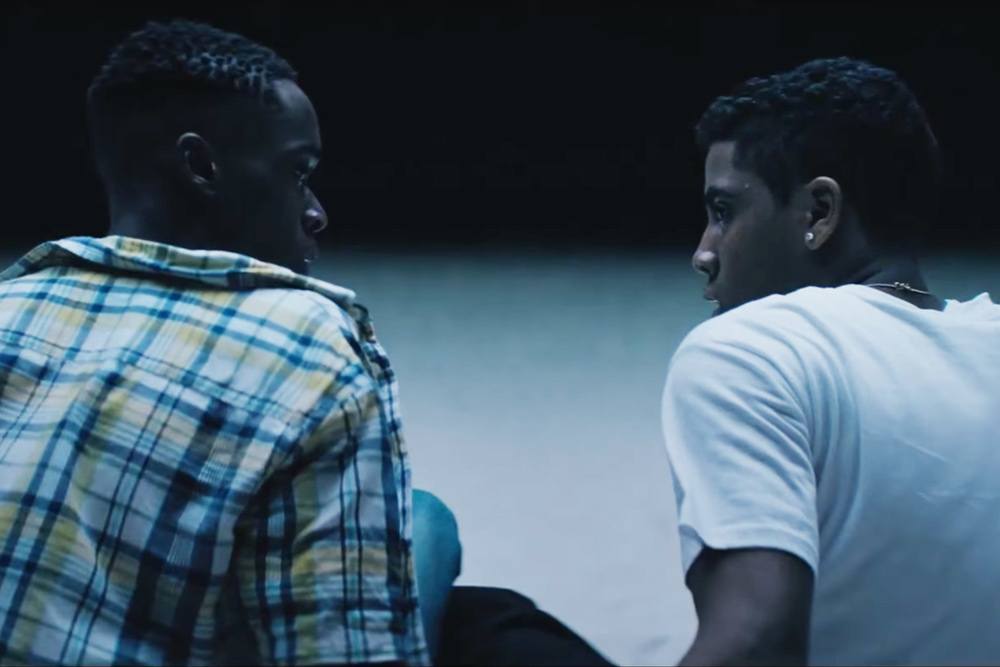 Obviously this all goes south after a bully goads Kevin into beating Chiron up. We see Chiron in an intense moment of vulnerability, covered in blood and baked in tears. Then his final transformation into what he believes is maturity shows him bathing his face in ice water. More contamination-the coldness is how he approaches the world. Detached, isolated and uncaring. This is of course unnatural to him, but it’s the only way he believes he can survive. And it’s what happens when he grows into an adult and slings drugs, just like Juan. At least until Kevin comes back, and he’s ready to uncover. The way this is shown? Chiron has a wet dream.

We get to see the ocean again as Chiron drives to meet Kevin in Orlando. This time we see children playing in the water, bathed in moonlight. Close to connecting to that inner child, the need to feel content with himself. He meets Kevin, and they toast over wine. More contaminated water, but this time warm, inviting. Carefully regulated. When they arrive at Kevin’s apartment, he mixes water with fire: they complement each other. We see what pushes Black to be bathed bluein the closing shot of the film. As blue as the watery ocean in front of him. He is, for the first time, able to ride the waves and complete his baptism of self-acceptance in a world that fought tooth and nail not to allow him to reach that.