fIn the far off, impossible to see future of 2020, Noah (Anthony Kapfer) and Erica (Nina Tandilashvili) take part in an experiment that puts them on a blind date. The twist being that they ingest a beta test nanotechnology that renders them mute but able to converse telepathically. As they partake in their four-hour excursion in a park, they begin to notice a lot of side effects, including censorial punishments and bizarre malfunctions. Their continuous assaults brought on by the tech’s developer Tellr begins to grate on the two in differing ways.

Mute Date is the latest feature by independent filmmaker Cody Clarke on a budget of just 500 dollars. It has a seriously fascinating premise that looks into our obsession with technology and its overreach of our personal lives. It has the added spin of corporate overreach and how they attempt to control our actions for their own benefit.

While that stuff is fun and interesting, what really sparks this story to life is the leads. Kapfer and Tandilashvili have a lot of screen presence and physicality, which is clearly important as nearly all of their dialogue is dubbed. They have a very easygoing chemistry with each other too, with a very fun banter quickly endearing us to the couple. It really helps you root for them individually and also their burgeoning romance when the silly side effects of the beta test start to manifest. 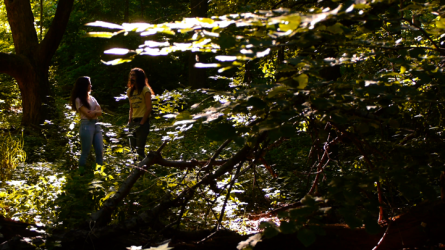 There’s not much in the way of an active plot until the final 30 minutes or so. It’s mostly watching our two leads stroll through the park getting increasingly ridiculous punishments by Tellr. A lot of the engagement is riding on the actors and dialogue. While not every joke or satirical jab works for me, I did find it endearing and airy just watching these two characters talk and get to know each other. The power of good characterisation is the ability to put characters you like in a room and just have them talk and you’re engaged. The use of blocking the characters’ telepathy in various intervals gives a chance for more physical interactions. There’s a really funny example of this with ads being read out.

Props as well needs to go to the sound design. The overdubbing has a stilted tinny-ness that feels right out of a beta tested product still working out the bugs. I particularly liked the alert sound that came in when Tellr interacted with the leads directly, though it stops being used later on in the film. The Tellr supervisor is voiced by Anna Fikhman, and she does a fantastic job. She has that robotic irritating cadence that makes you want to throttle the machine, and it makes her interactions with our frustrated duo all the funnier as a result.

Mute Date is ambitious and in tune with what it wishes to get across. It sort of like if Black Mirror did a Bujalski movie, tonally. While not everything about it worked for me, I wasn’t hugely into the slightly muddled goals of the system that are revealed right at the end. However, it won me over with two incredibly likeable actors and it getting across the frustrations of interacting with socialised technology. It’s light and funny, but with a twisted darker undertone, and manages to balance both well. Always on the look out for independent projects this innovative. 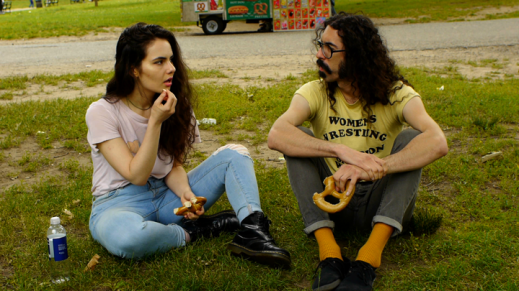 Mute Date is available on Amazon Prime in the United Kingdom and United States. More information available at the website.