The world of web series is not one I’ve particularly ventured on, despite spending the vast majority of my life on YouTube. But with an ever-expanding media landscape, and the relative shrinking costs of quality filming equipment, it’s a natural step that people would follow. Uploading your their content onto YouTube and other platforms is an easy way to get your passions out there and an avenue for audience exposure. One avenue you can take is creatively redesigning old stories in ways you may not have seen them before.

Mia Morris’ Diary follows, well, Mia (Skye Fitzpatrick), through a series of video diaries she records for her boyfriend Jim. One night, her and her best friend Lucy (Sharee Muller) go to party where Lucy appears to be attacked. Afterwards, a series of strange attacks happen all over their college, with a similar pattern to the assault at the party. Mia and her friends decide to get to the bottom of this as Lucy’s health deteriorates.

This series is a retelling of Bram Stoker’s Dracula, set (and shot) in Australia. What’s fun about the video diary setting is that it harkens back to the functionality of the original novel. In it, the events are told via a series of diary entries and newspaper articles, etc. So video diaries is a really natural modern spin on the classic tale. The videos are short, about 1-5 minutes long, and you can watch the entire story right now. The original run commenced in February. 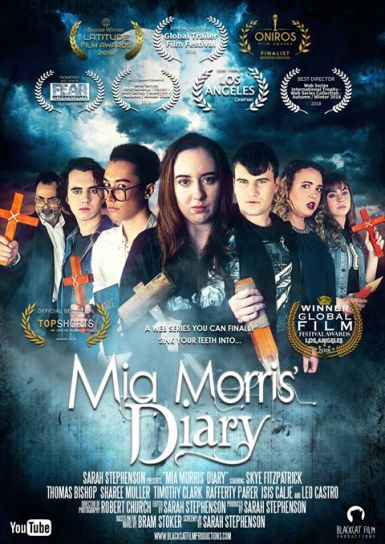 The series was created by Sarah Stephenson. It originally found life as a college project in 2017. This short was expanded on in late 2018 through Black Cat Film Productions. It’s a clear labour of love; there’s a clear passion in the making of it. The video diary gimmick helps keep the shooting economical, as most of the series is shot in Mia’s dorm room as she recounts the events of the story to her boyfriend. There are moments that break from this, however, including a hypnosis scene early on. There’s some fun use of camera crackles that were an inspired way to provide a sense of supernatural intrigue.

Some of the acting and blocking can be a little ropey (it gets better as we go along), but it’s got a sincerity that carries everything through. It’s a fun contemporary retelling of the classic tale without it being too flashy or losing its appeal. There’s a lot of potential with this team, and I look forward to seeing them grow and seeing what they have to offer next.

Mia Morris’ Diary is available in its entirety on YouTube.